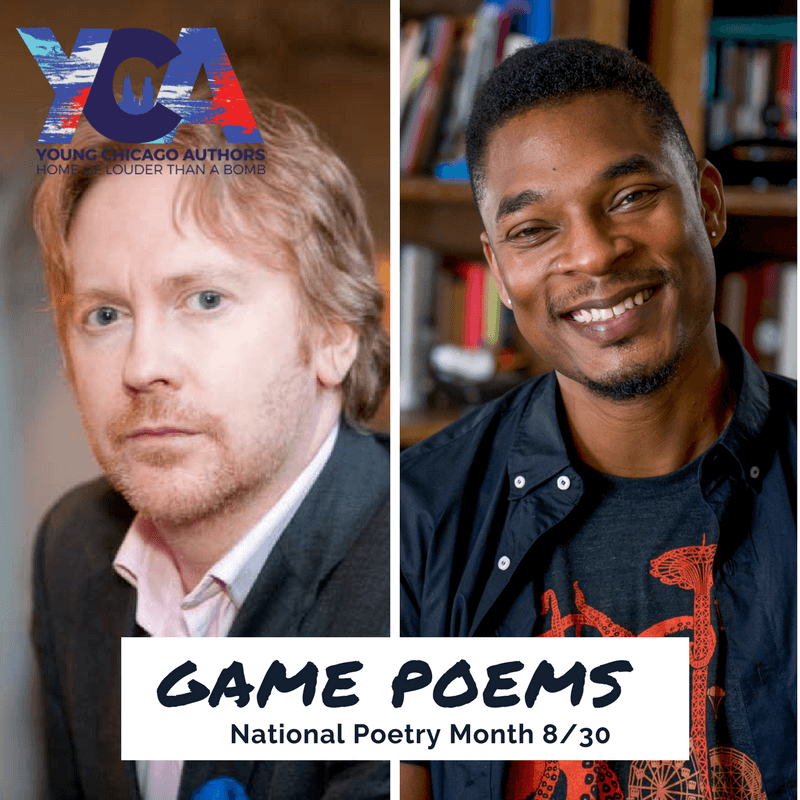 Here is prompt number 8, which uses a poem by Paul Farley and a poem by Terrance Hayes.

You’re told this deck was found
in some shattered bothy or croft
north of the Great Glen,
missing its six of diamonds,
shuffled and dealt to a soft
pliancy, greased with lanolin

and you’re told this deck lived behind
the bar in a barracks town
and came out to play most nights,
cut between the Falklands
and Iraq, its spring long gone,
dark-edged with mammal sweat

and you’re told this deck is the one
recovered from a halfway house
where fatty stalactites
grew in a microwave oven,
where a bottle of Famous Grouse
was brandished in a fight

and it might be a pack of lies
or it might be a sleight of hand,
and you can’t tell which is a bluff
because words are a good disguise
for holding nothing. I’ve found
that nothing is more than enough.

And here is all we’ll need: a card deck, quartets of sun people
Of the sort found in black college dormitories, some vintage
Music, indiscriminate spirits, fried chicken, some paper,

A writing utensil, and a bottomless Saturday. We should explore
The origins of a derogatory word like “Spade” as well as the word
For feeling alone in polite company. And also the implications
Of calling someone who is not your brother or sister,

Brother or Sister. So little is known of our past, we can imagine
Damn near anything. When I say maybe slaves held Spades
Tournaments on the anti-cruise ships bound for the colonies,
You say when our ancestors were cooped on those ships

They were not yet slaves. Our groundbreaking film should begin
With a low lit den in the Deep South and the deep fried voice
Of somebody’s grandmother holding smoke in her mouth
As she says, “The 2 of Diamonds trumps the 2 of Spades

In my house.” And at some point someone should tell the story
Where Jesus and the devil are Spades partners traveling
The juke joints of the 1930s. We could interview your uncle Junior
And definitely my skinny cousin Mary and any black man

Sitting at a card table wearing shades. Who do you suppose
Would win if Booker T and MLK were matched against Dubois
And Malcolm X in a game of Spades? You say don’t talk
Across the table. Pay attention to the suits being played.

The object of the game is to communicate invisibly
With your teammate. I should concentrate. Do you suppose
We are here because we are lonely in some acute diasporafied
Way? This should be explored in our film about Spades.

Because it is one of the ways I am still learning what it is
To be black, tonight I am ready to master Spades. Four players
Bid a number of books. Each team adds the bids
Of the two partners, and the total is the number of books

That team must try to win. Is that not right? This is a game
That tests the boundary between mathematics and magic,
If you ask me. A bid must be intuitive like the itchiness
Of the your upper lip before you sip strange whiskey.

My mother did not drink, which is how I knew something
Was wrong with her, but she held a dry spot at the table
When couples came to play. It’s a scene from my history,
But this probably should not be mentioned in our documentary

You say there may be the sort of outrage induced
By liquor, trash talk and poor strategy, but it will fade
The way a watermark left on a table by a cold glass fades.
I suspect winning this sort of game makes you feel godly.

I’m good and ready for whoever we’re playing
Against tonight. I am trying to imagine our enemy.
I know you are not my enemy. You say there are no enemies
In Spades. Spades is a game our enemies do not play.

Prompt:
Choose an aspect of the game (or the game overall) and write a history for it.
~or~
Write a documentary poem about your favorite game.