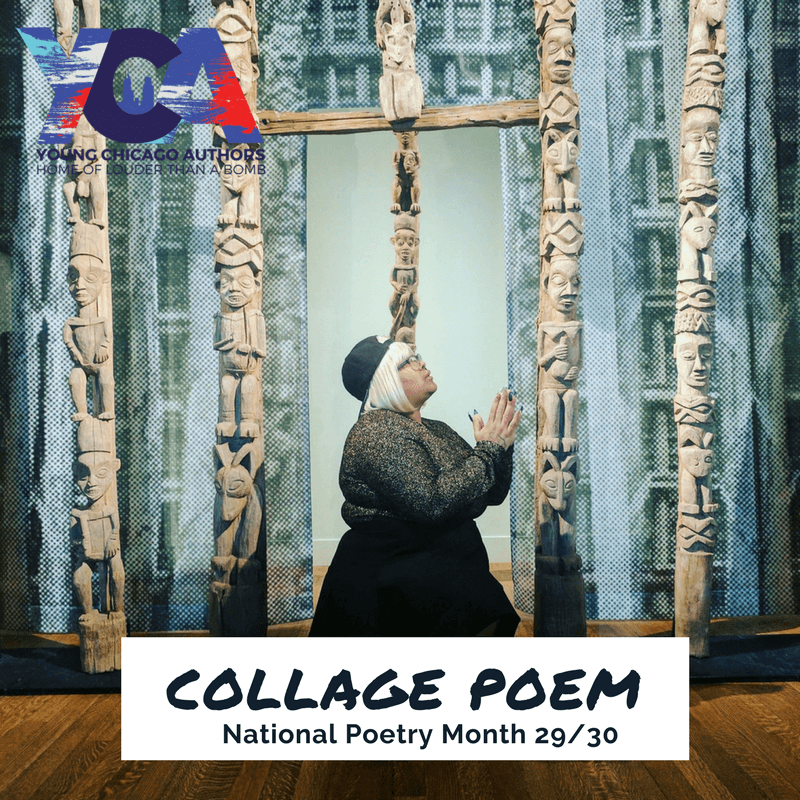 Here is prompt number 29, which uses a poem by Britteney Black Rose Kapri:

List:
Songs that you love
Quotes that you love
Songs you don’t like
The last 5 text messages you received
The last 5 text messages you sent
A paragraph from page 50 of whatever book you can find
Read: We House by Britteney Black Rose Kapri
After Krista Franklin’s definition of funk
House, as in abode, as in dwelling, as in crib, as in where your inhibitions go to rest. as in jack, loft, footwork. as in sweating out that press and curl. as in yo momma steppin out tonight. as in yo daddy put on his good shoes. as in this movement gradually getting Bigger Thomas. as in Pump Up the Volume. House as in bull pen. as in Detroit stay trying to claim our shit. as in we pledge allegiance to House Nation. as in The Warehouse. as in Professor Funk in full regalia. as in Chris Underwood on the 1s and 2s. as in The Chosen Few. as in Jackson Park. as in Black kids reading poems at The HotHouse. as in Hands Off Assata. as in shutdown. as in too many educated Black people downtown. as in “shiiid, we still got The Silver Room.” as in the Godfather himself teaching you how to pray with a beat. as in Rest in Rhythm Frankie Knuckles. as in a sea of Black bodies. as in Black bodies draped across poplar trees.
as in Black boys crumbling beneath white hands. as in we’ll never forget you Eugene Williams. as in a city of Fire. again. as in “Can You Feel It.” as in Stockyards. as in Hog Butcher of the World. as in butchered Black boys. as in Mamie Till calling for an open casket. House as in a Harold Washington. as in finally for the people. as in “ha y’all niggas thought you had something.” as in our skin is not for mourning. as in drum beats. as in we still don’t need to know the same language to speak. House as in fusion. as in niggas spent they whole time in this country making the best outta scraps. as in Shack comma Harold’s Chicken. as in free breakfast. as in Black Panther. as in lit candles and airbrushed RIP T-shirts for that kid down the way. and that other kid. and that other kid. as in yo grandma’s cooking on a Sunday after church. as in every week you live Black you’re served a last supper. as in yo cousin doing hair in the kitchen. as in a fan in the window cause “you bet not turn that AC on.” as in Your Love. as in Chicago is my kind of town, unless I can see the niggas. as in white flight. as in redlining. as in naming the train that separates us the Red Line. as in “y’all ain’t even trying to hide that shit no mo.” as in we ain’t going no where. as in we gone dance anyway. as in home is where the House plays.
Prompt:
Write a collage poem that pieces together various texts to create a portrait of a place, moment, or person.